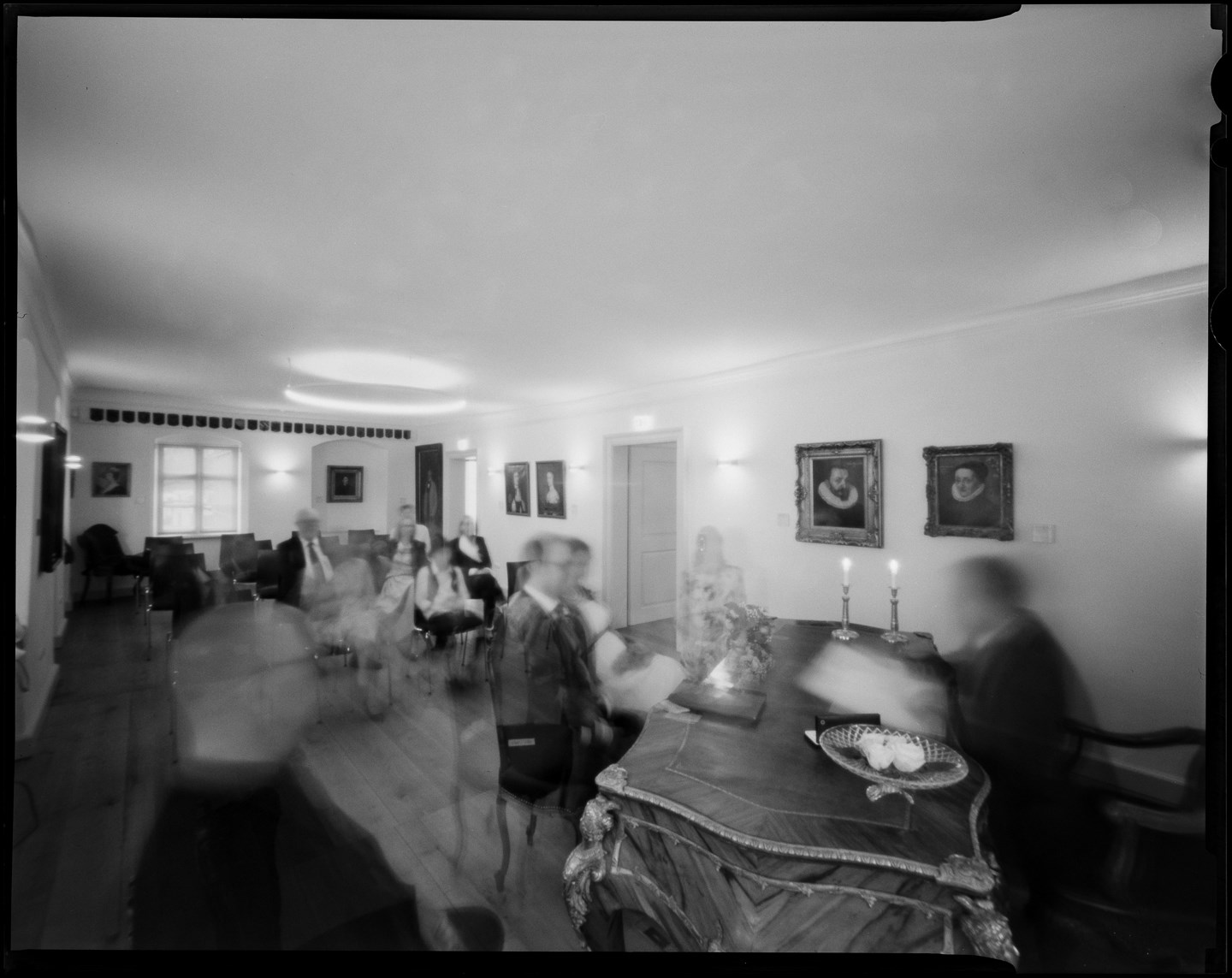 Bride and groom asked me, proud “co-witness” to their marriage, for an image of the ceremony. Preferably “all in one” for the two as one. The registrars of the registry office calculate “around 25 minutes” for civil marriages. Perfect for Camera obscura. All fine, let’s give it a try.

The day of the days in March was cloudy, no sun in the morning. My 4x5 inches CO offers a sleek 1:180, so no ND filters were needed. I choose the HP5+, nominal ASA 400. Ample opportunities for Push or Pull within a wide range. No hazzles to be expected, good working horse.

On location, the drawing-room inside a picturesque medieval castle, the pleasure started. The “area of emotions” in front of the stately bureau of the registrar showed EV 8. At ASA 400, that equals to f/2.0 and 1/60 of a second, for example. But remember, my CO’s fixed aperture is f/180 and this given leads us to 2 minutes exposure time.

Schwarzschild, not invited but there

Things get a bit tricky now. The reason why is reciprocity failure, also known as the Schwarzschild effect, which one has to have an eye on. Not at 1/60 sec but definitely at 120 sec. That Schwarzschild beast is an exponential one and for the HP5+, based on 120 sec, the correct time of exposure is around long 530 seconds. This, found mathematically, matches to the two additional f-stops being common sense and reasonable for long time exposures.

The marriage-ceremony was as gorgeous as relaxed and lasted 38 minutes. Effective exposure time for the whole dang accordingly was longer than whatever calculated number so far: Two f-stops. Ok, pull development of the HP5+ at ASA 100 should be fine. What to expect from the negative? Risk and fun? No, not a good idea when you have just one, single, not second try. So CO aficionado, think again. And again.

Yes, there was relevant amount of important white tone values to be considered. A one f-stop longer exposure might make sense. HP5+ to be pulled at ASA 200? Or nevertheless standard process at ASA 400?

First doubts. Had I metered the light just a mere 0.5 f-stops wrongly, not much to be honest, and the initial 2 minutes were more to 3 minutes the exponential character of the Schwarzschild effect would have almost eaten up the over-exposure of one f-stop. And, in addition to that, I did not want to loose any information the negative could provide when treated well.

1000 thoughts and some days later, I decided the HP5+ during the 38 minute ceremony had been exposed at ASA 300. Period. Research done, time for development had come.

After developing with a super-fresh special purpose developer from Klaus Wehner for the recommended 10 min and 45 sec at 22° C precisely, Stop and Fix and washing and drying followed as usual.

Fixed aperture, terribly small and fixed exposure time, terribly long. One single shot, one chance for development to make the one and only image happen.